"To the sonnet with all my heart" 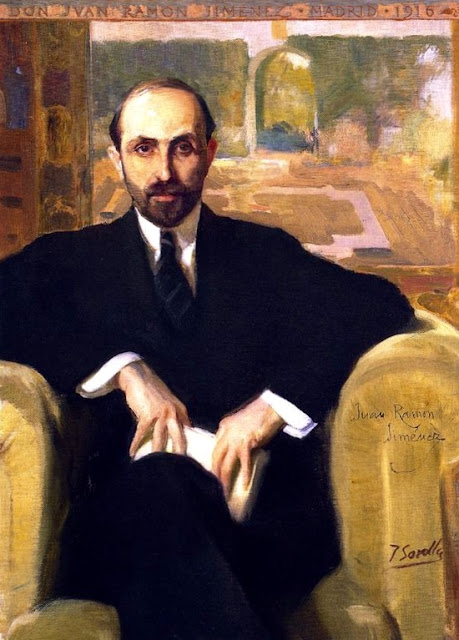 In one wing there is infinite flight
and in each rose some elusive scent,
like light darting from an open flame
or the blue of an unbroken sky.

As in song there is consolation,
in streaming jets a chill that pierces,
and in a diamond a noble gleam,
in me there is a constant yearning.

In your shape, sonnet, this pure anguish
traces, as if in a quiet pool,
all its sheer and undying wonders.

Radiant and ceaseless, your beauty
is--like the sky seen in a fountain--
free of the limits of its borders.

One of my favorite poets is Andalusia's Juan Ramón Jiménez (1881-1958), who was awarded the 1956 Nobel Prize. His imaginative leaps remind me of Rilke, and his work has the same insistence on confronting existence with open eyes and finding fresh ways of expressing its fundamental mysteries.

"Al soneto con mi alma" (To the sonnet with all my heart) is Jiménez's tribute to both the formal structures that make poetry possible and the sensual world from which they spring. It appeared at the head of the poet's 1916 collection, Sonetos Espirituales (Spiritual Sonnets).

The same year Sonetos Espirituales was published, Ramón Jiménez married the Barcelona-born writer Zenobia Camprubi, and the two collaborated on many writing projects over the next 40 years. A museum in Moguer, near Huelva in southwestern Andalusia, is dedicated to the couple; there's a link to its website below.

The portrait is by Joaquín Sorolla; it was painted in 1916.