"The Sail" by Mikhail Lermontov 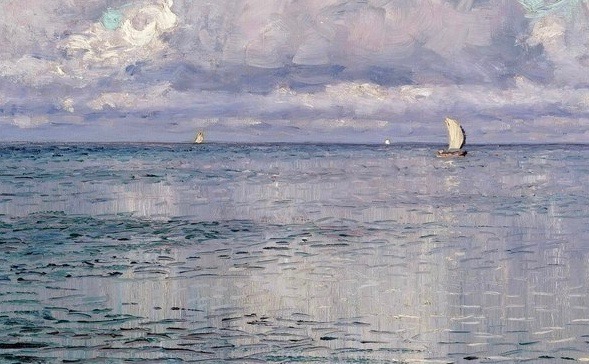 One white and lonely sail out there,
amidst fog and the ocean’s blue.
What does it seek in distant lands?
What’s amiss in the land it knew?

Waves leap up into whistling wind;
the tall mast bends; the rigging creaks.
This isn’t a flight from trouble—
contentment is not what he seeks.

Splashing spray is brighter than sky,
when sunshine pours from above.
But he, rebellious, seeks the storm,
as if in the storm there were love.

Mikhail Lermontov (1814-41) made his name at the age of 23 with a poem about the tragic death of Pushkin in a duel. Lermontov was part Russian and part Scot, the descendant of George Learmont, a Scottish officer who joined the Russian army in the 1600s.

Lermontov's poem was an outraged cry against the code of conduct that had led to Pushkin's death, yet Lermontov himself died the same way, challenged by a friend he had offended with his cutting remarks. The early deaths of these two poets made them legendary figures--much like Shelley and Keats in the English tradition.

Russian speakers read Lermontov's prose--in particular A Hero of Our Time--as well as his poetry. Like much Russian verse, the poetry is difficult to translate, because its meaning is conveyed largely through the use of rhyme. English has far fewer rhyming possibilities than Russian does, so whether Russian rhymes can be reproduced in English is largely a matter of luck.


Boris Pasternak's "My Sister Life," written during Russia's
tumultuous year of 1917, is dedicated to Lermontov. "What was he to me, in the summer of 1917?" Paternak later wrote. "The personification of creative adventure and discovery--the principle of everyday, free, poetical statement."


That dedication forms a link between Russian Romanticism and Russian Modernism, as if "The Wasteland" has somehow been dedicated to Shelley or Keats. (The image at the top is a detail from "Seascape," a 1910 painting by Nikolai Dubovskoy.)